Our vision for Regional Air Mobility

Electric vertical take-off and landing (eVTOL) aircraft are a hot topic in the aviation industry, and discussions of them often center around "Urban Air Mobility" or UAM. Everyone knows how frustrating it is to be stuck in traffic in the city, and the idea of taking off in an eVTOL air taxi and zooming through the air to your destination is very appealing.

However, we believe that over the next decade eVTOLs will be most valuable for personal transport between cities, not within them. We call this "Regional Air Mobility" or RAM.

The fastest option available today for many urban journeys, and the baseline for comparison, is the car.

Significant time savings over cars will not be easy to achieve with eVTOLs within cities because, while they are much faster, their passengers will need to use heliports to embark and disembark. These are smaller, more efficient, and more numerous than airports, but they still add overhead to your journey. It will typically be necessary to use a car to get to and from the heliports.

Dufour Aerospace is developing a hybrid eVTOL aircraft and larger cousin of aEro 2 called aEro 3, which will cruise at 350 km/h. As we will show below, this high speed makes it worth the time to go to a heliport for most journeys over about 75 km.

For even longer journeys over 500 km or so, going to an airport will be worthwhile, since commercial jets fly upwards of 800 km/h.

We can model approximate door-to-door journey time for these transport options as follows:

Taking a database of airport and heliport locations in the most populated region of the US east coast from Washington DC to Boston, we estimated door-to-door journey times for 1000 population density weighted random origin-destination pairs. We assume that commercial flights are available between any given pair of airports, which is of course often not the case. 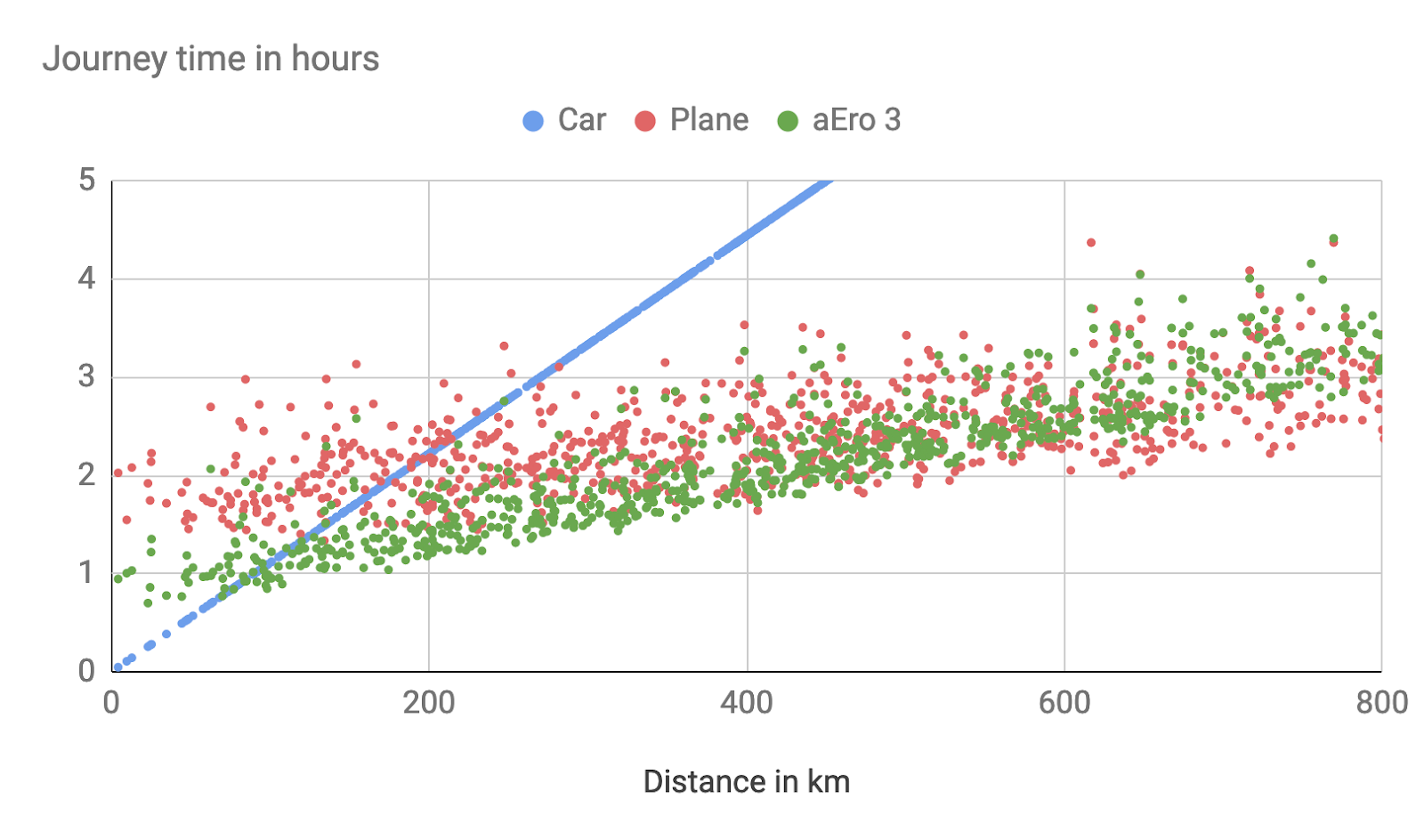 To get a better idea of what this distribution looks like geographically, we took a fixed destination (the MIT campus in Boston) and estimated journey times for a grid of around 20,000 origin points according to the same model.

Each point on this map is colored according to the fastest mode of transport to MIT, including transfers and overhead: 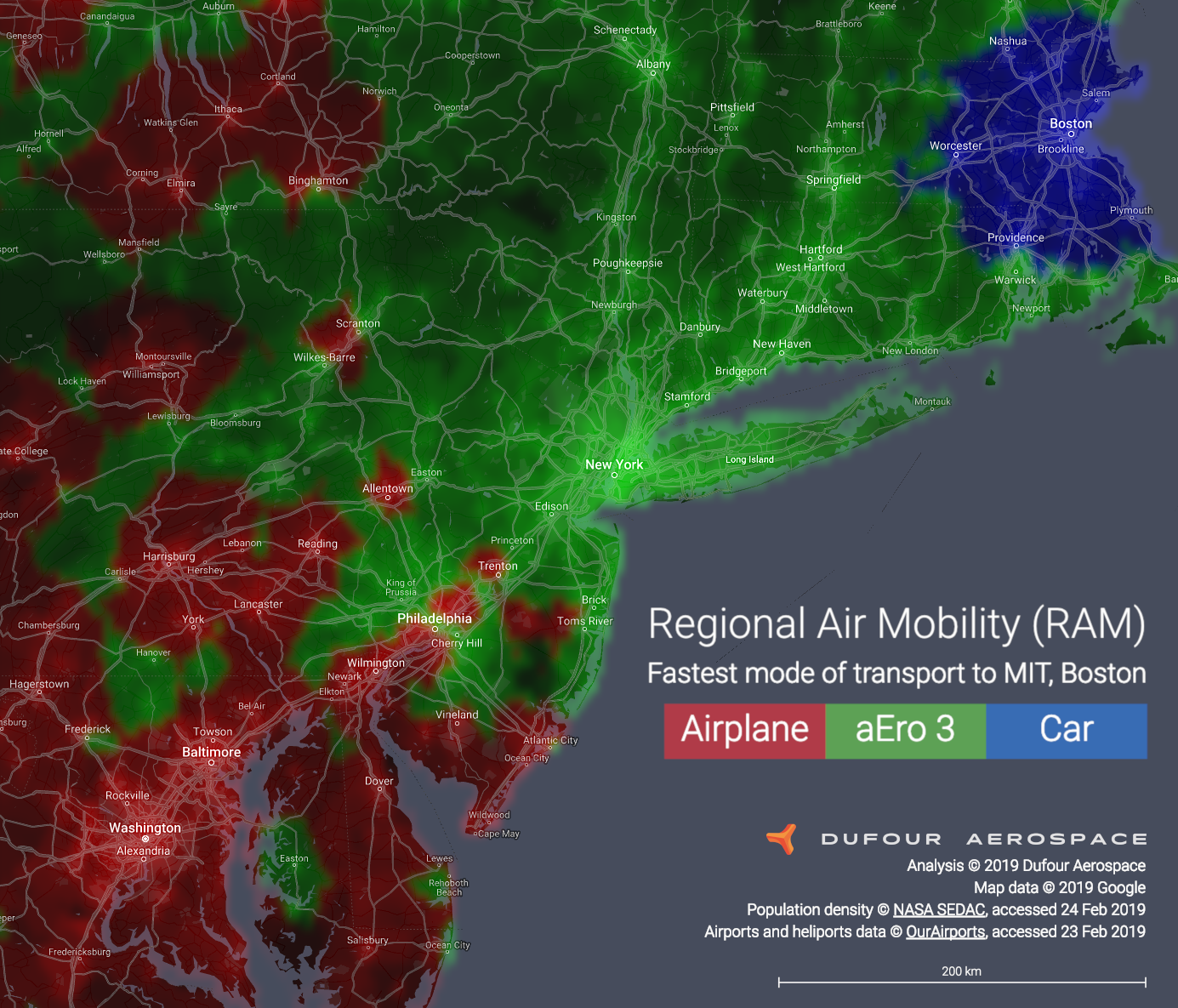 You can see that, for example, it makes sense to take a jet flight from Washington DC or Baltimore to Boston, but if you're starting in New York then it will be quicker to use aEro 3. In fact, aEro 3 will be the fastest mode of transport for most journeys of between 75 and 500 km. It outperforms airplanes due to its VTOL capability, even with conservative estimates of heliport efficiency.

Factors that will tip the balance further in aEro 3's favor include:

From this simple analysis, it is clear that aEro 3 will be able to save people a great deal of time on journeys of between 75 and 500 km using infrastructure available today. This includes both city-to-city transfers and a large potential regional market which is currently underserved by commercial air transport.

In time, more urban heliports will be built and UAM will become a reality. But over the coming decade, we believe that Regional Air Mobility (RAM) is where eVTOLs can offer the greatest personal transport value.

We will release further details on aEro 3 over the coming months. Get in touch if you'd like to join us on this journey.

This website uses cookies to improve your experience while you navigate through the website. Out of these, the cookies that are categorized as necessary are stored on your browser as they are essential for the working of basic functionalities of the website. We also use third-party cookies that help us analyze and understand how you use this website. These cookies will be stored in your browser only with your consent. You also have the option to opt-out of these cookies. But opting out of some of these cookies may affect your browsing experience.
Necessary Always Enabled

Any cookies that may not be particularly necessary for the website to function and is used specifically to collect user personal data via analytics, ads, other embedded contents are termed as non-necessary cookies. It is mandatory to procure user consent prior to running these cookies on your website.